Are you making a difference in this very moment?

My colleague, author Randy Hain, suggested I do an exercise. He told me to write my clients’ names on a piece of paper (I added close friends), and circle them. Then, I was to write what each one cares most about next to their circled name. Randy predicted that I would see themes.

Almost without exception, everyone I listed wants to make a difference in the lives of others. How they do it varies greatly. I work with leaders who, regardless their actual job, come to work each day because they’re making a difference in the lives of those they lead. Many, including those in senior executive positions, care most about the impact they are making on the lives of their children, members of their community or even the end-user of the product or service their organization produces. One, a CEO of a thriving non-profit, says that while she’s passionate about the work of her own organization, she does what she does every day to positively affect the non-profit sector overall, because of the enormous impact it has on the lives of those in her community.

There’s a reason why this commonality exists. Making a difference is a fundamental human drive.

Recently I learned of the death of a family friend. He was the owner of an independent grocery store in the small city  in which I grew up. His obituary said the city would have been a  different place without his compassion and the help he offered to his fellow citizens. He offered credit before it was the norm, and he helped many start small businesses. This man knew his purpose, and it was very different on the surface (selling bread and green beans) than in its depth (improving lives). He made a difference, though I’m not sure he would have known he was doing so at any given time. He just followed his heart.

And that is the point of my post today.

As you go about your full lives, it is easy to lose touch with your sense of purpose. It is easy to forget the impact of a small gesture, brief glance or word of encouragement. But even as you lose touch, the energy of it lives on. Every single positive thought or action affords many reactions. In this very moment, as you read this post, you are making a difference. Your – our – power and influence is humbling.

Let the awareness of your impact fuel your future actions. We all need one another.

The following post appeared originally on The Spirited Woman at the start of Arizona’s monsoon season. It’s finally fall…and the lesson endures the seasons.

It’s that time of year in Arizona when we long for the monsoon to come and cool the temps by at least a few degrees. Early Saturday morning, toward the end of a lovely, meditative hike with my friend Beth and the three canines, I felt several drops of rain hit my arms and face. While scant raindrops might go unnoticed by most, we desert dwellers are on high alert, and treasure them even if only a few fall. 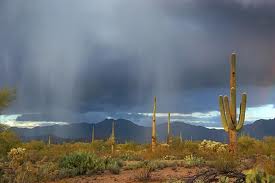 “It’s raining,” I exclaimed. “Well, at least I felt raindrops.”

I looked up to the sky. There were some rogue clouds – indeed, one which was producing this sprinkling – but certainly no monsoon-style, cumulonimbus towers.

Then Beth said something remarkable. “It’s funny, I was just thinking about doing a rain dance.”

I was reminded of a classic lesson I learned many years ago reading the book The Isaiah Effect. In it, author Gregg Braden relays the story of having been invited by a Native American friend, David, to share in an experience of what he thought was to be a prayer for rain during a major drought.

Gregg observed his friend’s short and silent ritual, after which David was ready to leave and get lunch. Puzzled and apparently expecting a longer and more participatory ceremony, he said he thought they had come to this place to pray for rain.

David answered.  “If we pray for rain, rain could never happen. Because the moment you pray for something to occur, you just acknowledged that it does not exist.”

He went on to explain.

“In my prayer, I began with the feeling of gratitude for all that is and all that has come to pass. I gave thanks for the desert wind, the heat, and the drought, for that is the way of it, until now. It is not good. It is not bad. It has been our medicine.

Like David’s, Beth’s rain dance in her mind and heart had been a prayer for rain, though perhaps less intentional. And so began that morning’s desert lesson. Be careful what you pray for – you just might get it.

It turns out that’s the title of a book by Larry Dossey MD. Dossey is known for his groundbreaking work exploring the role of prayer in healing. His research has led to what he calls the non-local mind and the merging of spirit and medicine. He says this book’s purpose is to help people gain the ability to reshape private thoughts for the benefit of mankind.

Back at home after the hike; the lesson was presented as another reminder that our thoughts and feelings pack a punch. They are, as Braden, Dossey (and I) have witnessed, our prayers.

Settling down to breakfast, I glanced at a post from the evening before. It was an account of an unfolding event in which a man’s three dogs were apparently stolen before his eyes. Even though it involved strangers, I had been shaken by it. I felt the man’s grief, as well as anger toward the person who, on the surface, appeared to be a perpetrator.

I tried to wipe it from my previously blissful psyche. But my sadness prevailed. Then, suddenly, it dawned on me that I was praying for rain. I was further endangering the situation by amplifying my own negative emotions. A calm came over me and I very simply and deliberately imagined – felt – a positive outcome. Even more importantly, I reframed my feelings toward the woman suspected of wrongdoing. Reminded of the wise saying, “Let God handle the details,” I did not wish her to have a change of heart and return what she had purportedly stolen. I simply raised her up in my heart, in a loving and non-judgmental way. In my prayer, I asked that she connect with her highest and best self.

One hour later, I saw a post confirming the outcome. The dogs had been returned and all was well.

I don’t claim to fully understand the quantum mechanics of prayer, and I don’t believe my practice was solely responsible for this welcome outcome. Yet I know what Dossey says is true. Our private thoughts do impact the collective.

Reframing emotions is not easy. I was able to reframe mine on this morning in good part because I just had walked in the rain that my friend’s mental dance had produced. This is the first lesson, spirited women, the one before the big prayer. Gather strength from the seemingly small or inconsequential miracles that you create with the resonance you put out through your thoughts and feelings. Your faith will build as you gain awareness of how very powerful you are.

“We must feel the feeling as if the prayer has already been answered.”

I often write about “ease,” and the preponderance of everyday miracles. And I have written many times of the power that managing our thoughts and feelings has on the outcomes we achieve. I strive to walk my talk, and on some days I’m more successful at doing so than on others. Putting forth the effort and energy to maintain the resonance of what we desire, vs. dwelling on what appears to be a negative circumstance takes focus – and faith. Here’s a short story for illustration.

I own and operate a very small business. A few weeks ago, an employee of 15 years resigned to pursue an offer that utilizes her many years of experience, and at the same time allows her to do new things in an area that is important in her life. I was and am truly happy for her, and yet my first thought was a very emphatic “Yikes!”  Her work here is mission critical, and we are (as is true most of the time) in the middle of a critical project. And the role requires a unique skill set.

On the morning she gave notice three weeks ago, I was immediately aware that I had a choice. I could allow myself to feel stress, and thus create a stressful condition. Or I could view the situation as one more opportunity to see and seek the opening door vs. dwell on the one that was closing. I chose the former.

Armed with a positive vision, I went into motion. I sent a brief description of the role to several trusted friends, and began making a plan for transition activities. Even though I was busy without this added task, time seemed to expand to allow for it all.

As I write this post, I sit across the room from my new employee who is spending her first day with me. She was the first to inquire about the job, and the only person I interviewed. Seemingly out of nowhere, the apparent perfect person materialized.

Since the day she magically appeared, I have had moments in which I’ve second guessed the synchronicity. But I’ve managed to banish those thoughts as my very real due diligence (interviews, references and skill assessments) has proven, once again, that it doesn’t have to be hard to be right.

If there is a burden you bear at this moment, you know intellectually that your thoughts and feelings about it are conspiring to determine the outcome. Shifting the energy that you carry requires discipline. It also requires faith. Faith is the burden-carrier, releasing the mind from over-analysis and fueling the effort required to take right action. Let it go, and watch what happens next.