Have you rushed into this new year to find yourself already running on empty? Here’s a gentle nudge to be mindful of your own need for renewal.

I had one of those early morning dream states in which I was already up and at my desk. The last two hours were not real sleep, and served as an omen for the day ahead.

When I reached for the half-and-half (yes, it’s as much my habit as the coffee), it was low. So low, I would have to conserve if I were to have second cup. Running on empty.

Things proceeded as planned, though with a definite layer of unexamined stress surrounding my activities. “What is this?”

I put the thought (feeling?) to the side and carried on. A glance at a friend’s Facebook post revealed a challenge. “What is one thing you will do to renew yourself today?” I had no response. Struggled with it for 30 seconds then moved on to my next task. Yes, I know I could have saved time by not being seduced by Facebook. I was not there long.

Task, task, task. One foot in front of the other. Suddenly, the time to leave for a meeting grew near. As I began a print for a document I needed, I considered the paper level. Running on empty. The printer ran out before the last two pages printed. Empty all the way.

I filled it and stowed my document.

A few other minor annoyances arose, and when I reached my car I had no room for error.

Out of gas. Empty. (Oh not really, because I had enough to get to a station. Just running on empty).

I stopped to fill the tank, and made arrangements to call my client from the car if needed.

The afternoon proceeded generally as planned. The stress seemed to dissipate, yet something was still off when I arrived home.

The dogs were waiting for me, and very vocal about my arrival. Oh yes, they love me but they were hungry. And thirsty. Whisper pointed out the fact that the bowl contained only about an inch of water. (Mind you, if there was an inch, they were hydrated). When I went to fill the bowls, even the water tank was low and I had to replace that. Low, not empty.

In loving memory of Whisper. “It was a beautiful life for a most beautiful girl.” 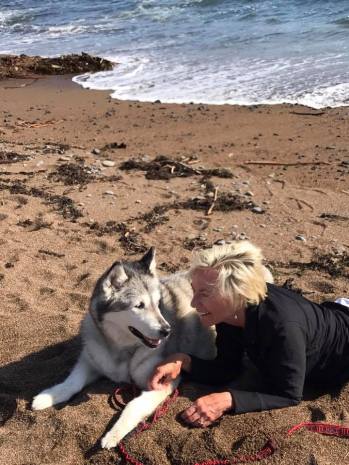 What do you do when your tank is low? Do you let it run dry? Do you replenish it at the last moment like I did today?

Perhaps the most important question – for me and for you – is my friend’s Facebook challenge: “What is one thing you will do to renew yourself today?”

I will answer that tomorrow morning, and I know it will transform my day.

It’s Friday, will you find some time to relax during the weekend? Check out Deric’s amazing demonstration and reflect on Andrea’s 2014 call for relaxation in her article A time to Work…and a Time to Relax.

Once again, my friend and coach Dana Sterling, a therapeutic movement facilitator, offered a simple yet profound lesson that links body, mind and spirit.

Want to feel better? When at rest, rest. When you need to work, expend the energy. Contract your muscles, (mental or physical) deliberately and intentionally.

Go ahead. Because if you don’t, your mind will tell you that a state of relaxation is risky … that it leaves you unprepared, unarmed for what life may bring.

When you sleep, do you really rest? Or do you wake or rise stiff and unsteady? When you deal with stress (the usual stress of life) does it linger, and extend into the next moment and then the next? Do you confuse a state of readiness, which is found in relaxation, with a state of tension?

I know I do. And Deric Stockton’s amazing demonstration has given me pause. Pause, yes. Relax.

The following is a recount of an event that took place over a year ago. It seems like an appropriate message as this week closes.

Every now and then, I get a simple stress test. I had one last night.

It was 1:45 a.m., late enough that I was finally in a dream state, yet sufficiently early enough to not be disturbed by thoughts of unfinished to-do’s or the bottle of water I finished before bed. Delicious, deep sleep.

Then suddenly – lights, pulsing beeps, and a repeated, recorded announcement: “Proceed to an exit. Leave the building now.”

I sat up in my hotel bed and looked around. No smoke, no smell. For a brief moment I considered ignoring the warning – a misguided, sleep-induced idea of course – and then I heard doors opening and closing in the hall. I would join the others who must be more aware of what was happening than me.

What to wear? What to take?

I located a sweater and pulled it on over my pajama top, more for decency than warmth. Next I found my room key (didn’t they always say to take your key in the event of a fire?) and my phone, and exited, joining many other guests on the parking lot. I was on the first floor, so my trip to a side door exit was a short one.

Understandably, no one spoke to one another. We all found separate places to stand or sit. I chose a corner curb, but not after envying many who had brought along their rental car keys and entered their cars, making a nap a possibility.

Why had I not brought my car keys? And my wallet? I briefly considered the hassle of having my wallet burned in the potential fire, a scenario that seemed unlikely given that there were no signs of anything amiss. It was a lovely evening – quiet and warm – and a catastrophe was not in the offing.

About the time the sirens came roaring in, I was becoming annoyed. Who or what caused this interruption of my sleep? As I often do when things outside my control create stress, I had a conversation with myself. “You’re only making it worse. It is what it is. You’ll surely get some sleep before the alarm goes off.” And perhaps the most significant advice I had for myself: “Look around you. No one else is getting agitated. Just chill.”

“Why,” I wondered, “do I still sweat the small stuff?”

Soon enough, an official fire department vehicle drove through the parking lot, telling us it was safe to return to our rooms. While I wanted to know what had happened, sleep was more compelling.

Back in bed, I struggled to relax, stressed over the fact that my own alarm was set to go off in just a few hours.

At about 3 a.m., once I had finally gone back to sleep, the event repeated itself. This time I dressed, and took my wallet and car key. I would have gone immediately to my car had I not been stopped mid-trip by other guests returning at the advice of the staff. The alarms were quieted. I went back to bed again.

I’m guessing I got 90 minutes of sleep after that, for a total of four or five hours. It was certainly not a crisis, and I knew I would be able to (and did) function just fine the next day.

Why do I let these irritating yet small things annoy me?

When I checked out of the hotel this morning, the front desk manager was apologizing profusely to the man in front of me. “No problem,” he said with a smile. “It happens.”

I relaxed and tried to model this man’s equanimity. While I probably fooled the manager, I still felt annoyed.

Many hours later, I’ve let it go – of course. What I haven’t (completely) let go of is the question of why I compound stress by worrying about that which is out of my control.

Do you ever waste precious time and energy thinking and feeling violated by unintentional inconveniences? I do, too often. I’m going to memorize and practice the other guest’s line: “No problem – it happens.” I’ll let you know how it goes.